Kalisha Vietheer, moving on up 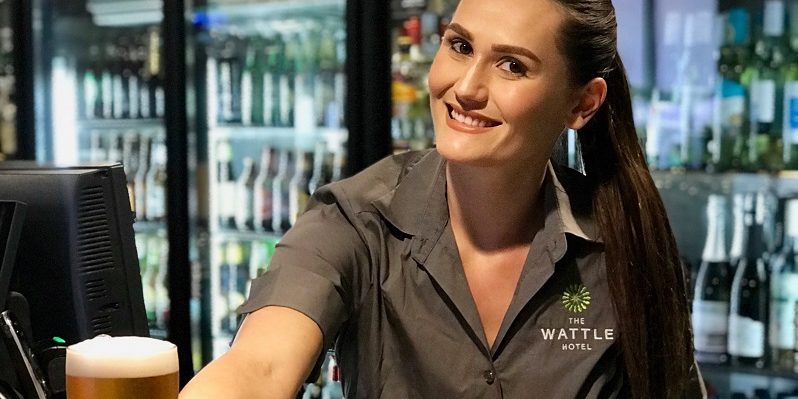 As anyone who works with us knows, we’ve always made a big song and dance about career development.

It’s important to us we can help you advance to whichever level you’re shooting for, no matter what your role. We like to think that this makes us a bit different from others places you might have worked in the past, but it’s always nice to be able to use a wonderful story from one of our own to prove it.

The amazing Kalisha Vietheer had been with us for over 5 years, currently Assistant Manager, as well as Gaming Manager, she started her career as a casual bar staffer.

“Each year that I have worked with Redcape, the company has given me the experience and knowledge required to progress to a new role,” Kalisha says. “I have worked for 4 different hospitality companies and Redcape is the only one that stopped me from bouncing job to job.”

Kalisha’s progress has come with its fair share of challenges, most notably some pretty big management transition issues at The Wattle, where she currently works. But she didn’t have to go through it alone.

“We had two Assistant Managers fly up from Sydney to help us. I don’t think they realise the impact they had on not only me but all the staff at the time,” she recalls. “When The Wattle was at its lowest point due to poor management, these two men came swooping in and lifted everybody’s spirits. They put all of the staff first while they worked long, exhausting hours away from home. They created a positive workplace atmosphere that made you want to come to work each day!”

In fact, Kalisha has been so impacted by various mentors across the course of her career that she remembers most of them by name.

In addition to extensive cocktail, wine, spirit, beer, coffee and customer service training, she singles out Gaming Manager Kendel-Lyn Dobson for passing on her knowledge and setting high standards for the gaming room, as well as Paul Berglund, her Area Manager. “Paul’s mentoring over the years has had an impact on me without me even noticing!” she says.

Confident in all aspects of her job, especially Front of House, Kalisha looks forward to the next step in her career with Redcape and whatever lies beyond.

“I will eventually learn things back of house and administrative, which will play an integral part should I wish to start a business,” she says. “I am still learning as I go, and I am certain that Redcape can provide the knowledge I need for any future endeavours.”

From bar staff to Assistant Manager, we’re proud as punch to have been there to help Kalisha as she rises through the ranks. “I hope to be in a support role of some sort where I can then motivate and pass on my knowledge to the next generation of leaders,” she says. “Redcape has a Family Feel & I have always felt valued as a staff member. There simply is no comparison.”

Caring for our volunteer firefighters
December 17, 2019
Go to Top