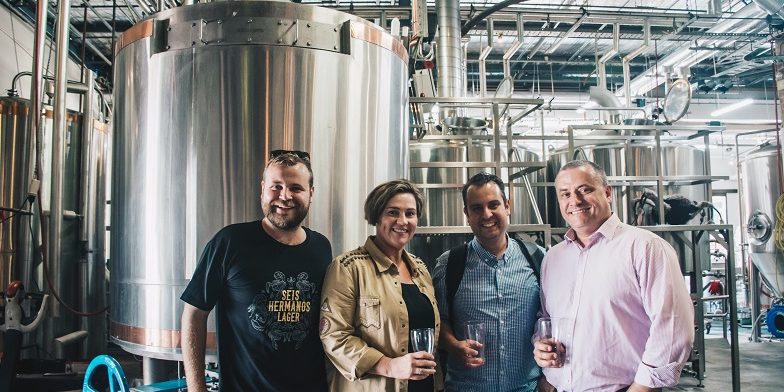 General Manager, Anthony Brady opened up the doors of the venue in time for lunch and the legendary brewery hospitality was on full display. The brewing team downed tools to help host the beer games and run brewery tours, while live bands rolled out the classics all afternoon.

With sections of the car park roped off and set up as an extended beer garden. The courtyard was prepared with the new mobile carriage bar pouring six one-off specialty beers including the popular Peanut and Jelly Brown Ale and the Thai Delight Sour Ale. Everyone’s favourite Australian Brewery beers and cider were pouring all afternoon in the Taphouse.

With a bus coming from Redcape’s three Illawarra venues and Senior Management attending, the space was filled for an afternoon in the sun. Head Chef, Sharon Vella created a bespoke churrasco BBQ out of kegs that served the Breweries famous chicken and lamb cooked over hot coals ensuring nobody left hungry.

Throughout the day, the brewers took turns hosting staff through the Brewery for a look at how the award-winning beer is produced. The staff even had the chance to taste some beer in the tank during fermentation for a behind the scenes look at the process. When not doing tours the Brewers kept an eye on the beer games, with lines to the cornhole tables all day.

After such a resounding success for the first edition, plans are already underway to host the second Brewery Open Day in the New Year. After a busy summer for all of Redcape Hotel Group and venues already putting requests for dates through it will be bigger and better than ever.